Natural language processing (NLP) is the study of enabling computers to understand human languages. This field may involve teaching computers to automatically score essays, infer grammatical rules, or determine the emotions associated with text. In this project we will employ NLP on Hacker News data. Hacker News is a community where users can submit articles, and other users can upvote those articles. The articles with the most upvotes make it to the front page, where they’re more visible to the community. We’ll be predicting the number of upvotes the articles received, based on their headlines. Because upvotes are an indicator of popularity, we’ll discover which types of articles tend to be the most popular.

This set consists of submissions users made to Hacker News from 2006 to 2015. Developer Arnaud Drizard used the Hacker News API to scrape the data (hosted on his github repository). DataQuest has randomly sampled 3000 rows from the data, and removed all but 4 of the columns.

Our data only has four columns:

Bag of Words Model to Tokenize the Data

Our final goal is to train a linear regression algorithm that predicts the number of upvotes a headline would receive. To do this, we’ll need to convert each headline to a numerical representation. 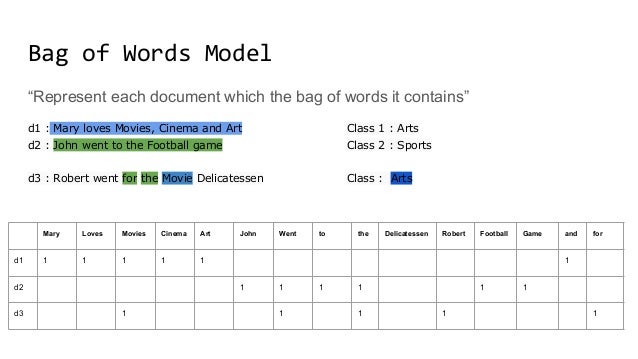 Step 1: Ttokenization or breaking a sentence up into disconnected words.

We have 2309 columns in our matrix, and too many columns will cause the model to fit to noise instead of the signal in the data. There are two kinds of features that will reduce prediction accuracy. Features that occur only a few times will cause overfitting, because the model doesn’t have enough information to accurately decide whether they’re important. These features will probably correlate differently with upvotes in the test set and the training set.

Features that occur too many times can also cause issues. These are words like and and to, which occur in nearly every headline. These words don’t add any information, because they don’t necessarily correlate with upvotes. These types of words are sometimes called stopwords.

To reduce the number of features and enable the linear regression model to make better predictions, we’ll remove any words that occur fewer than 5 times or more than 100 times.

We’ll train our algorithm on a training set, then test its performance on a test set. The train_test_split() function from scikit-learn will help us randomly select 20% of the rows for our test set, and 80% for our training set.

We’ll use mean squared error (MSE), which is a common error metric. With MSE, we subtract the predictions from the actual values, square the results, and find the mean. Because the errors are squared, MSE penalizes errors further away from the actual value more than those close to the actual value. We have high error (rmse of ~50 upvotes) in predicting upvotes as we have used a very small data set. With larger training sets, this should decrease dramatically.

How to make better predictions?